Khatun Bridgeis is 3 kilometers from the south of Khoy County on Ghatur River and along the Khoy-Uremia Road.
Bricks are used on the upper part of the bridge. There are seven great water openings and enormous stone bases are arranged between them. There are seven decorative arcades in the bridge.
Caravans from Ottoman would pass the bridge in the past. It was a passage for people until recently. However, a new bridge has been recently built along the previous one that is the link between people. 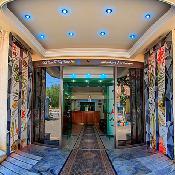