The thinnest dam in the world Shah Abbasi Taq has the highest record among the historical buildings in Iran! A dam with 60 meters height that not only is called the oldest and greatest arch dam in the world, but also it has been known for 550 years as the highest dam in the world. However, Shah Abbasi Dam has another name that no other dam has ever been able to gain: the thinnest dam in the world that is due to the one meter dam crest.
In order to visit Shah Abbasi Taq which is also known as Shah Abbasi Dam, you should travel to the 700-year-old village of Kharv 27 kilometers from Tabas City; somewhere close to Morteza Ali Fountain that we discussed about previously.
There is a narrow strait above the spring where Shah Abbasi Taq is built in. this Taq dates back to Safavid era. It is probably even older because archeologists believe that some antelope petroglygh are carved on them that are seven thousand years old and are a sign of asking for water, generation and abundance. Some consider these antelopes as signs of angels that pray for guarding water, increasing and abundance. 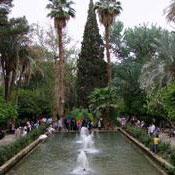 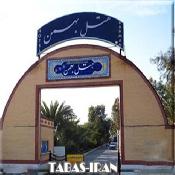