Home of the Iranian Lilliputs Makhunik is the name of avillage in Sarbisheh in Southern Khorasan; a small village most of whose residents are Afghan people for its little distance from Afghanistan borders. This district in Iran is known as Lilliput of Iran for most of its residents are short. Makhunik is one of the seven strange villages in the world. Lilliput Village of Iran owes its short men and women for its fame; people who sleep under shorter roofs than our house roofs and get out of their shorter houses than ours to go to the mines, pasture their livestock or plow their lands.
Lilliputian land in Iran with 12 smaller villages around it is the most unique village in Iran whose residents have inherited short stature disease from their fathers, generation by generation. Although Makhiniki children have become taller for today’s healthcare houses in the villages, if you still serach the village, you will find traces of miniature life of their ancestors.
The village is formed on a hill top which short houses pressed together in the valley. The house floor is one meter lower than the ground level and they have to bend down and pass the wooden doors to enter the house. Then they have to go down one or two steps to reach house floor. Despite all this, the architectural structure of Makhunik is not just bound to the small adobe and muddy houses. It has been years that today’s brick wall houses have reached Makhunik and have given a more modern color to the village.
Many domestic and foreign tourists visit the village at the moment and it is considered one of the target villages of Southern Khorasan. 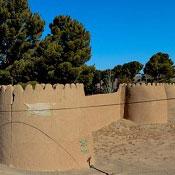