Khajeh Mountain (Oshida Mountain) or (Rostam Mountain) is in Sistan Plain and 30 kilometers from the south west of Zabol City. Oshida in Middle Persian language means “eternal”. This trapezoid-shaped mountain which is holy against three religions of Islam, Christianity and Zoroaster is made of black basalt and is located at the height of 609 meters from sea level like an island in the middle of Hamun Lake. The historical zone of Khajeh Mountain is an enormous castle and a unique urban fortress from Arsacid and Sassanid eras. This great monument is known as the adobe and mud Persepolis and it is the only urban fortress remaining from Arsacid era in Iran.
Numerous ancient monuments of Sassanid and Arsacid eras and remains of Islamic places and Buddhist temples are remaining in this place that include a series of palaces, Castle Kahak Kahzad, Forty Girls Castle, Sarsang Castle, tomb of Khajeh Ghaltan, the old building of Gandom-e Beryan, House of Satan, separate tombs and Islamic graves. Investigating the complex, Ernest Herzfeld selected the title “Adobe Persepolis” for the series of the palaces in 1925-1929.
Over the archeological studies on Khajeh Mountain in Sistan, 7 areasrelated to the paleolithic era were discovered for the first time. Getting to know these areas, Khajeh Mountain is the sixth place in Iran with monuments of that era. The oldest monuments discovered in Khajeh Mountain were related to pieces of pottery from Achaemenians. Additionally, another cave was discovered during the investigations.

General Specifications
Name
Mount Khajeh Archeological Site
Appellation
This mountain has gotten its name from Khajeh Mahdi one of the lovers of Alavi dynasy whose grave is atop this mountain.
Age
Paleolithic period
Restoration
Has been repaired in different periods of history.
Special features
It's known as the adobe Persepolis
Suggestions
Nearest tourist attractions
Hirmand and Chah Nime rivers
Access route
Address
30 kilometers southwest of Zabol, Sistan and Baluchestan, Iran
Facilities
Access to vehicles 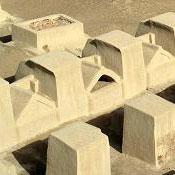 No record found in this area.
Ali
2020-03-08 12:38
Karma 0
Is it true that the wall paintings of this site are still intact? They should be urgently taken cared of and secured/renovated. This site is the gem of all historical sites in Sistan and will easily be a future Unesco World heritage site. It will generate millions of dollars of tourist income for this region. It is very significant for Christians as well as all Iranians and history lovers in general.
User Comments