About: Tomb of Sheykh Abolhasan Kharghani

Abolhasan Ali Kharaghani (born in 352 Hijri year and died in 425 hijri year) was an Iranian Mystic and Sufi. Apparently, he was born in 352 hijri year in Kharaghan Ghomes Village in Bastam Mountains. He was a follower of Bayazid Bastami and like Abu Saeid Abolkheir, he received his cloak from Ahmad Ibn Abdolkarim Ghassab. It is said that Sultan Mahmood Ghaznavi had visited him and had asked him for advice. In the narrations and stories it is stated that Abu Saeid Abolkheir and Pour Sina had gone to Kharaghan, had talked to him and had worshiped his spiritual position. Khaje Abdollah Ansari was one of his famous disciples and students. Sheikh Hassan passed away on Saturday, tenth of Muharram 425 hijri year in Kharaghan Village when he was 73 years old. 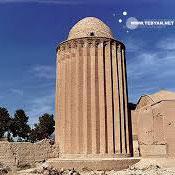