About: Jameh Mosque of Semnan

Jameh Mosque of Semnan is a valuable ancient monument in Semnan. This mosque has undergone many changes over time. According to historical texts, this monument goes back to Century 3 AH, and it was expanded in Seljuk, Ilkhanid, and Timurid periods. It is believed that this mosque was built on the ruins of a fire temple in first century AH. The atchitecture of this monument follows Azeri style. Jameh Mosque of Semnan was registered in the list of Iran's National Heritage 1931 under the registration number of 163.
On the northeastersn side of the mosque, there is a minaret on whose brick body an inscription is written in Kufic script. Due to the minaret's importance, it has been registered under a separate registration number. 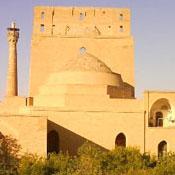