About: Mausoleum of Attar Neyshaburi

The Mausoleum of Attar Neyshaburi is a historical monument which was buil on Attar's grave by Amir Ali-Shir Nava'I in Timurid period. It was completely refurbished in the second Pahlavi period and partially refurbished in 1990s.
Farīd ud-Dīn Attar Neyshaburi, well-known Iranian poet and mystic, was born in 1145 AD and passed away in 1221 AD. His mausoleum is located on Erfan Street in current Nishapur and hosts people interested in Iranian literature and culture every year. His famous works are "The Conference of the Birds" and "Tazkirat al-Awliyā".
The tomb of Mohammad Ghaffari, known as Kamal-ol-Molk, famous Iranian painter, is also located in Attar Garden. The tomb of Kamal-ol-Molk was designed by Iranian architect, Hoohang Seyhoun.
Faience mosaic has been used to decorate the tomb of Kamal-ol-Molk. The skilled designs of faience mosaic have been used on curved surfaces of the monument, and these designs become smaller and smaller towards the symmetry line of the arches. According to the designer, faience mosaic reminds Kashan's architecture, i.e. the architecture of Kamal-ol-Molk's birthplace. The monument's façade and ornaments as well as its tiles are in so perfect harmony with the mausoleum of Attar Neyshaburi, located next to it, that the visitors may consider them as two parts of a single monument at first glance.
This place was registered in the list of National Heritage in 1963. 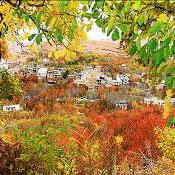