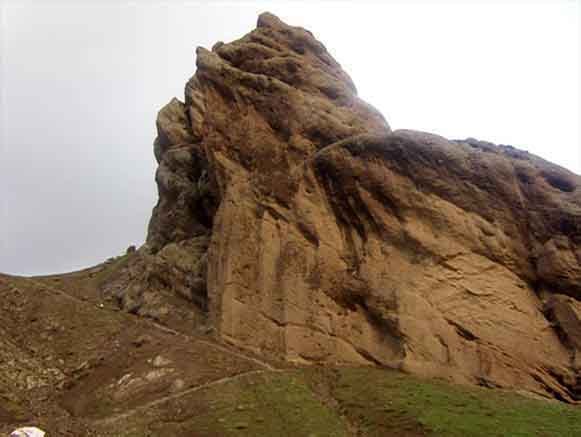 Alamut Castle is located in the north west of Qazvin Province near Gazorkhan Village. Popularity of this palace is for Hassan-I Sabbah, propagator of Ismailism during Seljuk. After being dumped out of Malik-Shah Seljuk’s palace, he went to Fatimid Caliphe to learn religious principles of Ismailism and was soon called al-Da‘ī al-kabīr. When he returned, he investigated all the places in Iran in search of a seat for his activities and finally selected Alamut area as the place for his activities. There are controversies over the year the castle was built but it can be dated back to the beginning of the Islamic period. Hassan-e Sabbah conquered the castle in 482 hijri year and paid one or three thousand Dinar gold as its price to the expelled king. The castle was occupied by Hulagu Khan in 482 hijri year. Occupying the castle and setting fire to its invaluable library, the castle lost value and turned into a prison and exile.
The remains of the castle are very few due to natural and unnatural accidents. The Cultural Heritage Organization of the country is scientifically excavating the area for more information regarding this historical castle.
Alamut Castle is called “Hassan Castle” by local people. the castle consists of western and eastern sections. The western side which is higher is called jurghola “meaning upper castle” and pilaghla (meaning great castle).
Alamut Castle is one of the most important cultural-historical centers of Iran since the third Hijri century until Safavid era and is registered in the list of national monuments of Iran with number 7252.