About: Petroglyphs of Damsiah Village 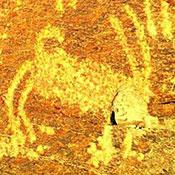 Imam Reza Hotel Khomein Khomeyn
Dr Mohammad Naserifard
2019-12-24 21:55
Karma 0
https://www.aparat.com/v/MvHhr
Dr Mohammad Naserifard
2019-12-24 21:47
Karma 0
In terms of scientific archaeological aspects as well as art history, Rock Arts are the most ancient and artistic phenomena left by mankind, in which lies a lot of mysteries. These are of the best open windows facing the distant millennia and therefore through them, various perspectives from the lives in ancient times can be observed.
Regarding to the context of the coded letters or shapes, alphabet, lines, messaging, languages, history, myths, art and culture, this would seem that all of them were derived from rock arts and so they are more able to be one of the best tools to pre-historic decoding that involved in interdisciplinary studies.
In a sense, Rock Art-Petroglyphs and Pictographs may be expressed as the first-hand documents in order to familiarize researchers with "translating" cultures from different climates and times. Speaking by the help of images and signs that were often the same for all the nations lived at various places and times; Indeed "an international common language".