Address:
Across the path of Sepahdari seminary, Arak bazaar crossroads (on the left at the first turn), Arak, Markazi province, Iran
Visiting time:
everyday except Mondays from 8 to 20
Weekly holiday:
Mondays This building was established at Ahmad Shah Qajar time. According to the studies and research, establishment of the aforementioned mansion is attributed to Haj Ali Moshiri, one of the carpet merchants and businessmen in Sultan Abad (current Arak). Two different periods are detectable in the construction of the building: the southern side of it is from Qajar era and its northern side is related to 1332 hijri year. The building has two floors. The Museum of Handcrafts and Traditional Arts of Hassan Pour in Arak was established on 20th of Khordad 1382.
This invaluable monument was registered on 1377/1/16 with registration number 1985 in the list of Iran’s national monuments. 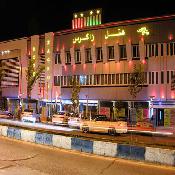