Construction of the central mosque in the ancient city of Shushtar started after the conquer of Muslims and peoples’ conversion to Islam in 859 during the 13th Abbasi Khalifa “Al-Mo’tez Bellah Al-Motevakel” who used to reign at the time of Imam Hassan Askari(praise be upon her) and it was finished in during the Mestershed Bellah reign. Shushtar central mosque was frequently renovated and repaired in the following centuries.
It is noteworthy that Shushtar central mosque is considered the oldest central mosque of Iran after Yazd central mosque, and it has an age of 1200 years (since 859), it has various and interesting inscriptions such as the inscription in which the Yasin verse is carved all around the wall facing Kiblah, or there is an ancient tribune which is the oldest tribune in Iran, moreover, it has two spectacular altars full of interesting patterns.
This mosque was registered in the list of national relics with the registration number of 286 and it is owned by the Endowments department. 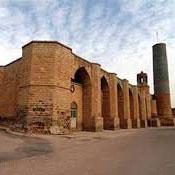