One of the most important elements constituting the initial core of each ancient city is its military castle or fortress. The fortress of each city is usually where the king or rulers reside. Shushtar was of utmost importance as the capital of Khuzestan Povince due to its historical values. As well as its political function, Shushtar Castle had a role in monitoring the efficiency of Shushtar Hydraulic Systems. Shushtar Salasel Castle is a huge fortress containing several yards, barracks, stables, bathrooms, shabestans, towers, gardens, armory, Naghare Khaneh (Timpani House), harem, kitchen, several قاپی ها, large pools, fence and moat. Salasel Castle has been refurbished over and over, and the ruins which can be seen now go back to Qajar dynasty castle. Unfortunately, all of the mansions of this castle have been destroyed and nothing has remained except underground rooms, Shavadans  and داریون tunnels.
This castle as well as other 15 monuments of Shushtar was registered in UNESCO World Heritage as the tenth Iranian monument on June, 26, 2009 by fulfilling criteria 1, 2, and 5 under the name of Shushtar Historical Hydraulic System and under the registration number of 1315. 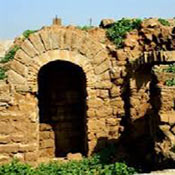 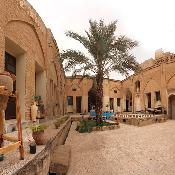