Armenian Church of Holy Garapet is one of the national monuments and attractions in Abadan that has always received many tourists and domestic visitors. This church is acting under the supervision of Caliphate Council of Armenians in the south and Isfahan and its building was registered in the list of Iran’s national monuments on ninth of Ordibehesht 1382 with registration number 8352.
Armenian Gregory Church in Abadan established in 1958 (1336 solar Hijri year) was considered the greatest amphitheater of resident Armenians in Abadn. The church was damaged during the war but it was repaired by the organization of reconstructing conflict zones.
Abadan Church has a hall in which there are tables for worshipers and one of the Armenian women with good reputation is managing it at the moment.
Abadan Church is registered as an invaluable national monument. 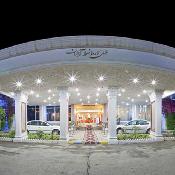