Of the deepest caves in the world 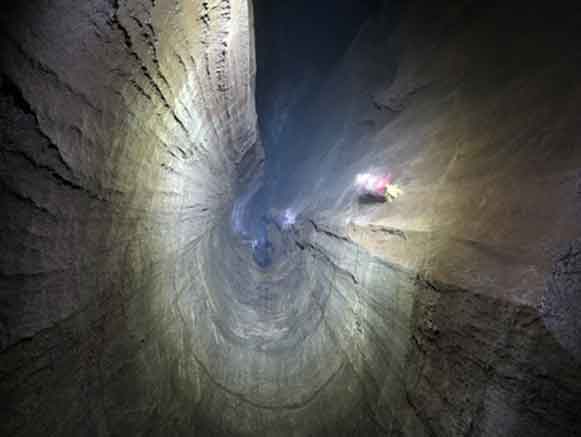 Parau or Paru (meaning full of water) is the name of a cave at 3050 meters height in Parau Mountain which is located twelve meters from the north east of Kermanshah City among Taq-e Bostan Mountain and Bistun Mountain and in the south of an area called Parau Square. This cave is located 300 meters down Sheikh Ali Khan Summit or Parau Summit. It was the greatest vertical cave in the world at the time of its discovery, more than 40 years ago (1971). That was why it is called Everest of all the caves in the world. This cave is registered as the second natural and national monument in Kermanshah in 1388 by Environmental Protection Agency in Iran.
Today, many deep caves are discovered throughout the world which are even deeper than Parau Cave and have sent this cave down to rank 221 in the list of deepest world caves. One of the exquisite features of Parau Cave is its three thousand meters height from sea level which is the highest level from sea among all the caves in the world.
This cave was recorded as the natural national monument by the Environmental Protection Agency in 1388. Moreover, it was registered by the Cultural Heritage Oranization with registration number 98 in the list of Iran’s natural monuments on 20th of Bahman 1389.

General Specifications
Name
Ghar Parau
Etymology
Parau means watery
Physical features of the cave
The depth of the cave is 751 meters and its length 1454 meters. It contains 26 pits and its deepest pit, pit number 16, has 42 meters in depth.
Special features
Of the deepest caves in the world
Suggestions
Necessary equipment
Fully professional equipment for caving
Special Offer
The enterance of the caveis completely riddled with pits and has taken the lives of many a people by now. Entering the caveis not recommended to ordinary tourists and even unprofessian cavers.
Access route
Address
In the vicinity of Chalabeh village in the height of 3050 meters on the southern side of Parau mountain's peak, about 12 kilometers north east of Kermanshah city, Kermanshah province, Iran
Facilities
Access to vehicles