Arg-e Bam was the largest adobe building in the world located near Bam, a city in Kerman Province southeast of Iran. On December 26, 2003, a devastating earthquake struck Bam City and its suburbs. Consequently, Arg-e Bam was entirely demolished.
"Bam and its Cultural Landscape" has been registered in the list of UNESCO World Heritage. This enormous citadel, located along the Silk Road, was constructed in century 5 BC and was still in use until 1850 AD. It is not exactly clear why it was not used anymore thereafter.
The whole monument is a huge fortress in the center of which the citadel (Arg) is located. However, due to the glorious appearance of the Arg which is also the highest part of the complex, the entire fortress building is known as "Arg-e Bam".
The building of Arg-e Bam, in its expanded form, consists of two parts: the "rulers' part" and the "ruled-over part". The former part, which lies in the most internal wall, consists of the citadel, a four-season mansion, barracks, a 40-meter water well, and a stable large enough for 200 horses. "The ruled-over part", on the other hand, is located around "the ruler's part" and contains the main entrance of the city, the main path connecting the city entrance to the fortress and bazaar alongside it, about 400 houses and public buildings like schools and sports centers. 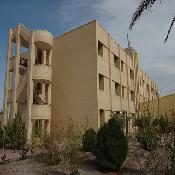