Gouged Arg(castle) is one of the oldest and most spectacular buildings of Golpaygan town in Isfahan province. This Arg is located in the 5 kilometer distance of Golpaygan route to Tehran and in a town called Gougad (one of Golpaygan suburbs). This Arg was used as an inn at the times of peace, and it was used as a military fortress at the times of war or the attack of enemies. This building is now used as a traditional three stared hotel.
Gouged Arg is registered in the list of national relics with the registration number of 2574. 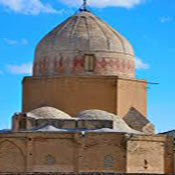