Pir-e Bekran tomb relates to the Ilkhanate dynasty and is located in the Flaverjan town, inside the Pir-e Bekran district. This relic is registered in January 6th, 1932 as one of Iran’s national relics with the registration number of 101.
Muhammad Ibn-e Bekran, famous by the name of “Pir-e Bekran ” was one the famous teachers and mystics of 7th Hijri century. Pir-e Bekran monument was the place for teaching and promoting the principles of Sufism and Myth by Pir-e Bekran. And his followers established the tomb of Pir after his departure for celebrating his scientific and religious eminence, and in fact, Pir-e Bekran town owes its fame to him. Currently, the tomb of Pir and the molding artist, Muhammad Shah-e Naqash is located inside this monument aside each other near the seclusion room. This monument is considered as one of the spectacular historical buildings of Isfahan province and Iran, relating to the Ilkhanate era, and experts believe the artistic value and architecture style used in the moldings and tiles of the altar, and the method of merging various types of handwriting and patterns to be one of a kind. 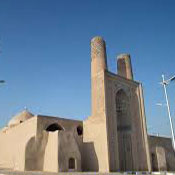