About: Jameh Mosque of Ardestan

Ardestan Jameh (central) mosque is a historical building located in Ardestan down in the north of Isfahan province. Master Mahmud Isfahani was the architect and mason of this building. This mosque where was formerly a temple or fire-temple in the Sassanid era is located in the center of Mahal neighborhood of Ardestan and is one of the oldest mosques of Iran. It is also the first two-floored mosque of the Islam history and is the second mosque with four porches in the Islamic world, established in the Seljuq dynasty.
Ardestan central mosque was registered in 1932 in the list of national relics with the registration number of 180. 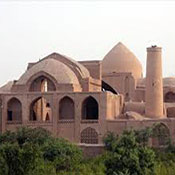