Mir Razi ad-Din Artimani was one of the famous poets and mystics of Shah Abbas Safavi who was born in the second half of the tenth hijri century in Artiman Village. His name was Seyyed Mohammad and he was known as Razi. His autobiography in the introduction of his diwan reads that he was living with his father in Artiman as a child. He went to Hamedan in young ages to study religious sciences. Then he lived some time as a student of Mir Morshed Borujerdi. Around 1000 hijri year, He travelled to Isfahan, the source of poetry and literature at the timeand found a high position in Shah Abbas Palace. He also became the brother-in-law of Shah Abbas. After a long time kliving in Isfahan, he decided to go back to his hometown and established a monastery on top of a hill and began guiding truthseekers. Mir Razi passed away in 1307 hijri year and was buried in the monastery. The building of the tomb is on top of the same hill. Saghinameh and Sogandnameh are his most important works. Tomb of Hayaquq the Prophet Tuyserkan 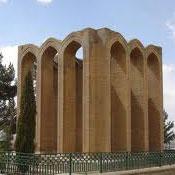