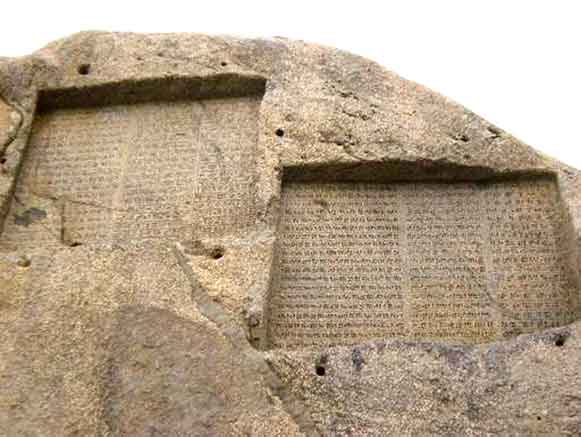 There is an impressive waterfall as well as pleasant nature known as “Hamadan Ganjnameh” in Alvand Mountain near Hamadan. To stone inscriptions, remained from Achaemenid Dynasty, attract attention in the middle of nature next to the waterfall. Each of These two historical inscriptions has been carved in three languages, namely Old Persian, Babylonian, and Elamite languages. The left-side inscription is a bit higher with the name of Darius the Great, and the right-side one is a bit lower with the name of Xerxes carved on it. The inscriptions were decoded and translated in 1941 AD.
Ganjnameh has a high potential not only in tourism and ecotourism but also in terms of cultural and ancient values.
Hamadan Ganjnameh Inscriptions were registered in Iran’s National Heritage on January 6, 1932 under the registration number of 22.

General Specifications
Name
Ganjnameh of Hamadan
Appellation
In persian language Ganjnameh means treasure tale and story.
Age
Achaemenid period
Builder
Darius, Xerxes
Suggestions
Best time to visit
Spring
Duration of visit
Half to one hour
Nearest tourist attractions
Ganjnameh waterfall which is quite near the inscription.
Special Offer
In order to get there, you best not trust the path signs and ask the personelle or people of the area.
Access route
Address
At the end of Abbasabad valley, 5 kilometers southwest of Hamadan, Hamadan province, Iran
Facilities
Parking

Baba Taher Hotel Hamadan Hamadan
Babak
2020-01-02 11:23
Karma 0
I'm the local guider for ganjnameh of hamedan and another beautiful places in iran country. for more information contact me. I can provide your accomodationand and tour. feel free to contact me.
call and WhatsApp:
00989185466711
email:
Babaak2016@gmail.com
User Comments