Gomishan Lagoon is in the form of a relatively narrow string which is positioned in a north to south direction in the south east coasts of the Caspian Sea. Gomishan pond is in the 24 kilometer distance of Bandar Torkaman. It is one of the ponds favored by migrating birds, which is considered as one of the valuable genetic reservoirs.
One of the unique features of Gomishan pond is its rare ecosystem in which various fish, crustacean, clam, amphibious, reptile and bird species can be found. Moreover, it is the autumn and winter habitat of some of the world’s rarest birds that are exposed to being extinct.
A part of this pond with an area of fourteen thousand hectares is managed under the title of hunting prohibited region since 1997. This pond was classified under the title of important international pond in 2001 in the Global Convention for Pond Preservation (Ramsar 1971) in the class of brackish waters.

Suggestions
Best time to visit
Late autumn
Special Offer
In order to visit the hunting prohibited area of the Gomishan wetland a written permit from the department of envirionment of Golestan province is required and this permit is only given and specific times to known and trusted groups and personnele
Access route
Address
Gomishan wetland is located within Golestan province, With north-south direction along the southeastern coast of the Caspian Sea. The wetlands are about 24 kilometers away from Bandar Torkman
Facilities
Residence
Does not have
Network coverage
Yes
Gomishan International Lagoon 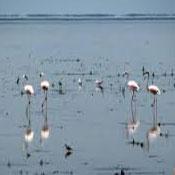