Marlik Hill is an ancient area in the east bank of Sefidrud and in “Gohar Rud” Valley in Rudbar in Gilan Province. Marlik Hill is the remains of the ancient civilization from more than 3000 years ago. Researchers assume that the hill had been the private tomb of the kings and princes of that civilization.
Marlik Hill was an unknown civilization up to 1340s. Gohar Rud Hill was probed in that year by an Iranian archeologist team supervised by Dr. Ezzatallah Negahban. There are many ancient hills on this plain and Marlik Hill, Zeinab Bijar Hill, Dur Bijar Hill, Pilaghal’eh Hill and Jazem Kul Hill are five of the most important ones. 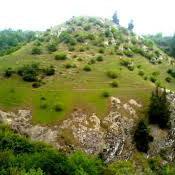