Sheytan Kouh is a mountain located in the east of Lahijan town in Gilan province of Iran. In the past, this area was called Shah Neshin Kouh and a pond is located in front of it with width of 200 meters and length of 70 meters which was used for reserving water for irrigation. Nowadays, this lake has turned into an artificial lake in where an island exists and a small mansion is seen on this island. In the heart of Sheytan Kouh, an artificial waterfall is formed which and its water is provided from this lake which is known as Lahijan Pool or Lake. This area has a favorable climate which with its waterfall and lake with the same name is considered as the highest tourist attractive place of Lahijan. The Shrine of Chahar Padeshahan Lahijan 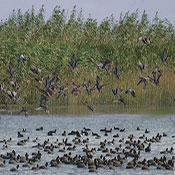