The first historical monument that is seen when entering Fars Province from Isfahan is the old Izad Khast Castle.
Izad Khast Castle is one of the Sassanid reliefs in Abadeh and structures such as a mosque and a bathroom were built in it later on. This castle is 57 kilometers from the north of Abadeh and is very similar to Arg-e Bam in Kerman.
The castle is at the top of a great rock and tiny houses with very narrow alleys can be seen in it.
This historical building is from the Sassanid era. One of the unique properties of this castle is its significant safety and the deep trench around it has made it one of the most unattainable buildings of the ancient times for robbers and the enemies.
The fire temple of Izad Khast Castle is the first fire temple in Iran which was turned into a mosque by the advent of Islam to Iran.
It is noteworthy that this ancient castle is the first adobe castle in the world in terms of history and it is the second adobe building in the world after Arg-e Bam in terms of extent. 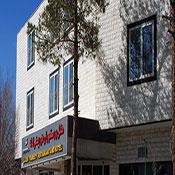