About: Holy SURP Hovhannes Church in Sohraghe or Sohrol Village

The oldness of church erection has been attributed to 5 and 6 century AD, but the main edifice has been reconstructed again and again due to destruction. Archaism of present building which has been made by Russian and French architects and Azerbaijan workmen turns back to 1840 AD. This church has been located in Shabestar County, Sufis district, Sohrol village. This church is one of the churches of Armenian Catholic and its name has been adopted from one of the apostles of Jesus named Johannes that Armenian call it Hovhannes.
This opus has been recorded as one of Iran’s national work with register number 766 in 1st of Farvardin, 1347 (1968). 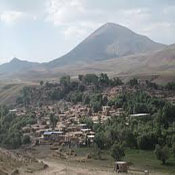