Several historical monuments in one region There is plenty of treasure in every part of Garadagh Mountain, which is inherited to us. However, much of the treasure is still unknown. Some of the identified treasures are Shirbeyt Castle and Shusha (Shisheh, i.e. glass) Urartian Inscription in the heart of Eastern Mountains of Ahar.
Shisheh Inscription (belonging to Urartians) is located in the heights of a village also named Shisheh on the way to Vargahan Village (East of Ahar).
Shisheh Inscription goes back to the first millennium BC. It was registered in Iran's National Heritage in February, 2001.
Shirbeyt Castle is also located in this district near a village which is called Shirbeyt as well.

General Specifications
Name
Shirbit Castle and the Inscription of Shishe Village
Appellation
The stone lion statue of the region was castle Shirbit's symbol of strength and its name was Shirbot and later on the village in the area was also named Shirbot but over time Shirbot has changed to Shirbit.
Age
BC
Builder
The inscription is related to the time of Argishti II the Urartu king.
Suggestions
Important parts to visit
Shirbit castle, Sanduq Dashi inscription, Gelin Dashi
Best time to visit
Spring
Nearest tourist attractions
Sanduq Dashi and Gelin Dashi around Shishe village
Special Offer
The path to Sanduq Dashi and Gelin Dashi is rocky and impassible.
Access route
Address
Vargahan road, Ahar-Kaleybar road, northeast of Ahar, East Azerbaijan, Iran
Facilities
Parking 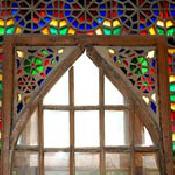