Persian Gulf is a sea along Oman Sea between Iran and the Arabian Peninsula. After the Gulf of Mexico and Hudson Bay, Persian Gulf is the third largest gulf in the world. From the east, it is connected to Indian Ocean and Arabian Sea through Hormuz Strait and Oman Sea. From the west, on the other hand, it leads to Arvandrud River Delta which stems from the connection of Tigris and Euphrates Rivers and the flow of Karun River into it. Iran, Oman, Iraq, Saudi Arabia, Kuwait, UAE, Qatar, and Bahrain have a coastline on the Persian Gulf. The northern coast of the gulf totally belongs to Iran's political geography. Due to the affluent oil and gas resources in Persian Gulf and its coastal areas, this area of water is considered an internationally important district.
April 30, which coincides with the deportation of the Portuguese from Hormuz Strait, has been named "Persian Gulf National Day".

General Specifications
Name
Persian Gulf
Suggestions
Best time to visit
Sunset and sunrise from spring to late autumn
Duration of visit
One hour to half a day
Perfect activity for a rainy day? 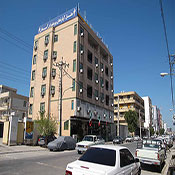