Also known as Sirab, Siraf is an ancient city located in the central part of Kangan County, Bushehr Province. It is one of the historical monuments and attractions of Bushehr Province in the south of Iran.
Siraf is among the oldest ports in Iran which used to experience a boom period. Siraf ancient city features specific architecture so similar to Masuleh Village in the north of Iran.
This port used to have a population of 300 thousand people, and because of its freedom of religion, the followers of various religions such as Zoroastrians, Christians, Manichaeists, Jews, Buddhists, and tribes including the Romans, Greeks, and Chinese lived there. The remaining cemeteries of different religions' followers in this ancient city indicate the freedom of religion in this Iranian port. Due to the existence of different civilizations and religions as well as their living peacefully beside each other in Siraf, this city is also called "the City of - Dialogue Among Civilizations".
Already, four historical monuments of Siraf including wells and stone graves, Sibawayh's Tomb, Jameh Mosque, and Nosouri Castle have been nationally registered. After it was approved by the government, Taheri Port's name was changed to Siraf Port, and now it has the qualification to be registered in the international list of UNESCO. 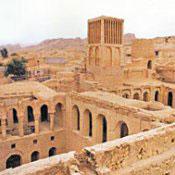