This castle is located at a large historical site. Owltan castle or Oltan castle is the name of an old castle in north of Ardabil province near to ParsAbad city.
The castle has been located next to Aras River and in adjacent to the old Owltan village. The remaining parts exhibit a military castle. This castle was first shaped by Parthian and has been used until 12th century. According to the entire scientific guess and predictions, the majority part of castle’s building has been buried beneath the soil. 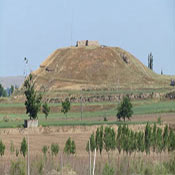