Meybod is a city in Yazd province. This city has a few thousand years of history. This city is considered to be the second urban and commercial center of Yazd province and due to its valuable historical structure, most of the city has been registered on the list of Iran’s historical monuments. It’s also worth mentioning that Jahanabad town is also one of the major industrial centers of this city, and by producing half of the tiles and ceramics of the country, this county, is also considered as the production center of these products.

Considering the coined coins of Meybod in Sassanid period, it becomes clear that Meybod was a great and important city in late Sassanid era; since, from more than a hundred and eleven pre-Islamic cities identified in Iran only a few number of them had coinage conditions or its permission. The remaining coins from the time of the Sassanid Boran, which were coined in this county, are of the historical proofs that show the political and civilizational importance of Meybod county during Sassanid era.

According to the available evidence and findings of investigations, the first foundation of Meybod city belong to ancient periods of Iran’s history. Because of this, International UNESCO Organization, has placed the old city of Meybod among the experimental historical-cultural monuments of Iran. The oldest evidence of the city’s historical identity and the start of urbanization in Yazd, is Narin Qaleh of Meybod; the construction of which is attributed to Prophet Solomon. 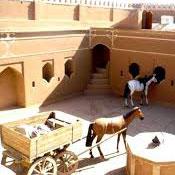