Khoy is the second most important county in West Azerbaijan province. Khoy county is located at the northwesternmost part of Iran and Azerbaijan, at the border between Iran and Turkey. Khoy county has the highest number of Shia Muslims among other counties of the province and it is the 18t historical and cultural city of Iran. The green tourist town of Firuraq, Ali Sheykh village, Var and Pasak villages and Qotur district with its healing hot spring are considered as the tourism centers of this county. Khoy county is situated on a vast plain, neighboring the Maku county from north, Salmas county from south, Marand county from east and Turkey from west. Khoy, due to being a very beautiful city and having green and pleasant gardens and many pleasing views and grasslands, was named Dar al-Sfa and after that become known as Dar al-Momenin in the 13th century. Khoy city is one of the oldest cities with a Turkish population in Iran and it has also been mention in the historical texts of Seljuks. 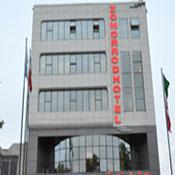