Sari is the center of Mazandaran province in north of Iran and the largest and most populous city of the Mazandaran province. Sari, the center of Mazandaran, was one of the largest cities of Tabaristan and the command center of the Ispahbudhan. This city, which dates at least to six thousand years ag, has always been under the Iranian rule and in different periods of history has been invaded fewer times than the other provinces. This city has several natural and historical attractions and is sister cities with some other cities in the world such as Gomel, Najaf, Dar es Salam, Astrakhan and Marche. 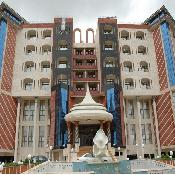