Aran and Bidgol county with four subsidiary cities (Aran and Bidgol, Nushabad, Abuzeydabad and Sefidshahr) is the northernmost region of Isfahan province and of the oldest human settlements in Iranian plateau and its history traces back to the Sialk civilization (with about nine thousand years of history).

This county is made of the unification of the two old cities of Aran and Bidgol. The existence of hundreds of old  qanat chains, ancient monuments and castles across Dashte Kavir within the vicinity of this county, and some qanat chains that cross from the lower levels of the structure of the old Kashan city, shows the ancient history of development and prosperity in this region. Aran and Bidgol, with unique historical and natural monuments and its own special traditions and customs is considered of the tourist attractions of Isfahan province. 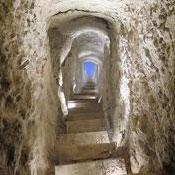