Sarab is one of the cities of East Azerbaijan province and the center of Sarab county to the east of this province. The existence of Urartu inscription, archeological sites and stone temples in the outskirts of this city speak of the ancient history of this region.

Sarab was one of the regions that had urban civilization during the Urartu empire. Even some of the researchers and archeologists believe that the graves scattered around Sarab city are more ancient than the Urartu inscriptions, also the remnants of the conquests of Urartu rulers date he history of this area to the years 730 to 685 BC.

The existence of two Urartu inscriptions in the vicinity of Sarab at Nasht Oghli and Dizaj Razliq are of great importance in terms of historical monuments. 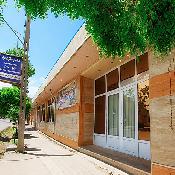