Osku is one of the cities of East Azerbaijan province and the center of Osku county. Osku is located to the southwest of Tabriz, on the northwestern slope of Sahand mountain, on an altitude of 1579 meters above sea level.

In the past, there was a city on the slope of Sahand mountain and to the east of lake Urmia named “ Ush Kaya”, which seems  to have been situated at the location of current Osku city. The name of this city appears on the inscriptions of Argishti I and Sargon II (the Assyrian king). Hamdallah Mustawfi, in his book Nezahat al-Qulub, considers Osku as one of the largest villages of Bavil region which neighbors Bavil, Khosrowshah, Fassaghandis and Milan villages. Naderi aslo, in Alam Ara, introduces this village as one of the most prosperous regions of Azerbaijan. During the events of the Constitutional Revolution, the people of Osku rose in protest alongside the people of Tabriz against Soviet Cossacks and government forces. 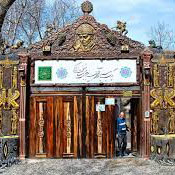