The former name of Bileh Savar in the tongue of the locals was Aranliq, which means a sunny lowland plain. Later, it was called Pil Savar, Bil Savar and, eventually, Bileh Savar. Bileh Savar is located on the northeastern corner of Ardabil and south of Aras river, with about 50 kilometers of distance from the Caspian sea.

Bileh Savar has more than four thousand and five hundred years of codified history which have been studied by Samuel Kramer on the Sumerian inscriptions. It has been named on Behistun inscription and Golshin Stone which is in the border between Iran and Iraq. The history of this city is available in the books of Diakonoff, Rahim Raisnia, Professor Zehtabi and others. After the treaty of Turkmenchay, Bileh Savar became the capital of Mugan and remained so until 1948. Before Turkmenchay treaty, the great Bilesh Savar city was a battlefield for twelve years during the war between Iran and Russia. Russia intended the destruction of this city but didn’t achieve its goal even after sixty years because of the endeavors and sacrifices   of men and women of this land. This issue is revealed more in political travelogues. 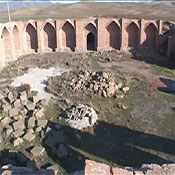