Shir Ghaleh dates back to Tabaristan Government which governed some areas of Iran in Arsacid period and constructed this castle to protect the road branched off from the Silk Road. In centuries 5 and 6, Isma'ilists, mainly residing in Alamut Castle, used Shir Ghaleh. In fact, they had made an underground tunnel from the castle to the castle spring to use its water and remain safe from the enemies. The interior space of the castle is currently buried under the earth. However, its walls and towers and fortifications have remained rather intact.
Shahmirzad Shir Ghaleh, located beside Ghaleh Sheikhi, Large Ghaleh Saru, Small Ghaleh Saru, and Vahl Castles, is considered as one of the most important and attractive castles of Qumis ancient region. It also has spectacular nature and fine weather has increased its attractiveness.
This monument Semnan was registered in the list of Iran's National Heritage on November 26, 2001 under the registration number of 4427. 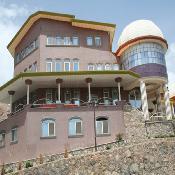