Farah Abad Historical Complex comprises of a set of historical buildings related to the remains of the ancient Farah Abad City that is located on Sari-Farah Abad Road. These buildings were built at the time of Shah Abbas Safavi and were considered highly prosperous ports at the time. Beig highly prosperous, they were called Darolsorour or Darolsaltaneh at Safavid era.
Many of the buildings in the ancient city of Farah Abad have been ruined throughout the history under Russian attacks. Jameh Mosque, school, a part of Shah Abbasi Bridge, a wall of a palace and bath from Safavid era are the remaining parts.
This monument was registered in the list of Iran’s national monuments on 16th of Esfand 1355 with registration number 1376. 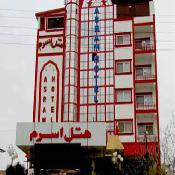