About: Tomb of Mir-i Buzurg Amol

Mashhad (Place of martyrdom) of Mir-i Bozorg is a building and tomb relating to the Safavid dynasty, but it is originated in the 8th Hijri century. This relic was registered as one of Iran’s national relics with the registration number of 59 in January 6th, 1932.
The tomb construction is one of the most important historical buildings of Mazandaran provine and Iran which was built in 1611 during the reign of Shah Abbas Safavid on the grave of Mir Qavam Mar’ashi, the founder of Mar’ashid dynasty in Mazandaran. This historical building is located in the old texture of Amol town, in Sabzeh square and near the Great Musalla. This building is rare in terms of architectural features, dome, façade, tiling and inscriptions. It has a square plan, a 781 square meter area and its material is mostly bricks.
Seyed Qavam Al-Din Mar’ashi with the title of Mir Bozorg was one of the greats of Mar’ashi Seyeds and was the founder of the Mar’ashid dynasty of Tabarestan. He was one of the grandchildren of a person named Ali Al-Mar’ash whose family tree reaches to Imam Zeyn Al-Abedin in four generations. 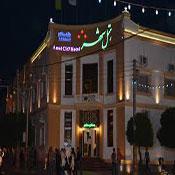