About: Jameh Mosque of Saveh

Jameh Mosque of Saveh is among the first mosques built in Iran and Saveh County. It was adorned and refurbished by Iranian artists during different periods in a way that nothing has remained from the initial building of the mosque as e result of the refurbishments. This mosque is completely made by mud that has made it unique. Jameh Mosque of Saveh consists of a court and a dome in the south, two porches, one minaret, some shabestans, several old mihrabs with Kufic script, and two mihrabs from Safavid period with Thuluth script.
One of the features of this religious-historical monument is that the signs of three historical periods (pre-Islamic, early Islamic centuries, and Safavid period) are visible in it. The remains of this monument indicate the fact that it has been a fire temple during Ancient Iran's period, and changed to a mosque in the Islamic period.
The mosque covers an area of 4200 square meters, and it was registered in the list of Iran's National Heritage as the first historical monument of Markazi Province.

General Specifications
Name
Jameh Mosque of Saveh
Age
Seljuk Dynasty
Restoration
Has been repaired in different periods of history.
Special features
The especiality of this ancient place is that the aspects of three historic periods (Pre-Islamic, Islamic and Safavid) can be seen in it.
Suggestions
Nearest tourist attractions
Qal'eh Dokhtar
Access route
Address
At the end of Salman Savaji street, at the southernmost point of Saveh city, Saveh county, Markazi province, Iran
Facilities
Access to vehicles 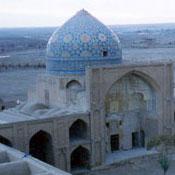