Pol-e Dokhtar County is one of the counties of Lorestan Province located in the south of the province.
The county is named after a strong large bridge in the entrance to the city. Currently, the ruined pillars of the bridge, which is built over the river, can be seen, and its battlements under which the main road runs are still alive. It is currently difficult to determine the exact time of the bridge initial construction. In fact, it covers the historical periods of Sassanid dynasty foundation to 224 AD, and archeological findings have failed so far.
This bridge was repaired during the reign of Sassanid Shapur II, i.e. 310-379 AD. As a result, the bridge is mostly attributed to Sassanid Shapur.
This historical monument has been registered in the list of Iran's National Heritage under the registration number of 1678. 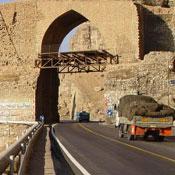