Of the six great treasures of the world. Kalmakareh Cave is a historically important cave in Lorestan Province in the west of Iran. This cave is located in Pol-e Dokhtar County in Lorestan Province. Almodn fish bowls of this cave are very well-known. Invaluable rhytons of this treasury were contraband abroad and this was one of the most important treasuries of the ancient Iran. Many reliefs of ancient Iran were found in Kalamakareh Cave that were all taken out of the country for the imprudence of the officials. The sacked items include rhytons, plates, statues and many unique items that are now being shown in museums such as Louvre, Metropolitan and British Museums.
Many of the historical and valuable items that were accidentally discovered in this cave in 1368 and are known as one of the 6 great treasuries in the world embellish foreign museums at the moment. This cave was registered as one of the national monuments of Iran on 22nd of Mordad 1384 with record number 13119. 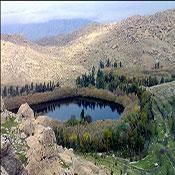