Homian Cave Paintings have been created on a cave in the north of Kuhdasht County, northwest of Lorstan Province. There is no accurate information about the time of these paintings creation. However, they might belong to the Paleolithic Age. Shared research between Iran and the Europe is being conducted in this district.
Based on research on a piece of bone discovered by Professor McBurney from Cambridge University, the area in which Homian Cave Paintings exist dates back to 149 thousands of years ago. Yet, the paintings g0 back to 2000 to 9000 years ago. It is noteworthy that Homian and Mirmalas Cave Paintings are not insdie the cave, but on some rocks inside the rock shelters.
These paintings usually depict the painter's wishes. The existence of these paintings indicates that human has been living in those districts since long ago.
Homian Cave Paintings begin with the painting of an anchor and end with some paintings of reindeer hunting fields. There are 10 paintings in Homian Cave and 18 paintings in Mirmalas Valley most of which are black and yellow. According to recent studies in Kuhdasht, there are more paintings.
Cave paintings can only be found in four areas throughout the world: Carcass and Lascaux in France, Altamira in Spain, and Homian and Mirmalas in Iran.
Homian and Mirmalas caves have been registered as "Lorestan Caves Complex" in the temporary list of the international monuments. 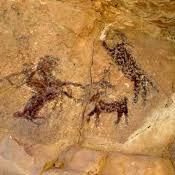