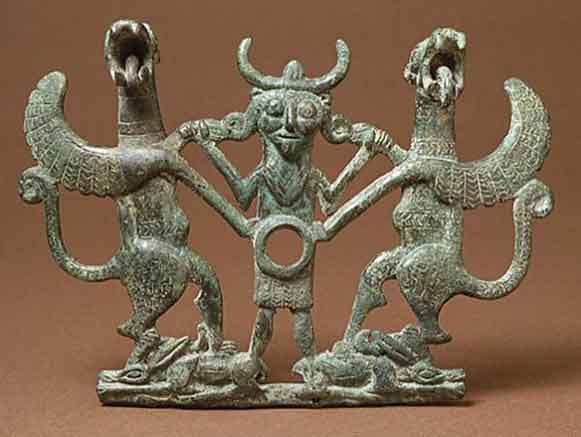 Mefragh or Bronze is an alloy of copper and tin that is used to create different tools and statues. Meragh is the oldest alloy made by humans because copper and tin alloy is naturally found in copper mines and that is why usually the first handmade metal tools were mostly made of mefragh.
Lorestan is known as mefragh city and that is why it is world famous. Mefraghs discovered in Lorestan are signs of their creators’ skills and zeal.
When mefragh items started being handed in domestic and foreign antique markets in 1930, Lorestan became famous; the city that might be the most pioneer area in Iran in combining art and the primary mefragh industry. Mefragh items found in Lorestan whose life goes back to the third millennium BC with their interesting and different forms, show off the art and advanced industry of this region and tell the story of its rich history.
Items found from the mountainous regions, temples and ancient areas of north of Lorestan (Kuhdasht, Aleshtar, Chegani and Nurabad areas) embellished the historical museums in the world, such that Louvre Museum in France was allocated only to mefraghs and Chicago, Philadelphia and Metropolitan museums host these monuments.
These mefragh makers who are known as Kasians and are almost today Lori people’s ancestors were living in Zagros Area (Lorestan) from the fourth millennium until the first millennium Hijri.