Zavareh Jame mosque was established in the Seljuq dynasty by Ali Ibn-e Ahmed Rais Zavareh whose name is in the Kufi brick carved epigraph of mosque court in 1135, and later a precious altar with fine filets and decorations were added to it.

Zavareh central mosque is the first mosque that was basically built with a four porch design. The building of this mosque was finished in 1135 and its altar which is one of the most beautiful parts of this building was built in 1156. In researchers’ opinion, the current mosque was established in the 1100s independently on the remnants of a chamber mosque and some parts of it were decorated by filets and bricks. The usage of glazed clay in chambers and colorful filets in porches are the relics of later ages.

This relic is registered in March 3rd, 1937 in the list of Iran’s national relics with the registration number of 283. 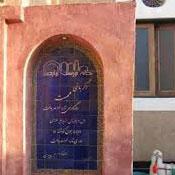