About: Underground City Of Nooshabad

In Chaleh Si historical complex of Noosh Abad town, one of Aran and Bigdel town environs, there is a town named “Ouyi” located underground which is surprising for all visitors. Noush Abad town was the capital of Khosrow I  of the Sassanid dynasty, and is located to the north of Kashan and in the west of Aran and Bigdel town in the 5 kilometer distance of Kashan. It is noteworthy that this complex has a history longer than 1500 years and to the Sassanid dynasty. Ouyi complex was formed in the old sub-texture of town and is spread to the current level of town. What is known as the underground town (Ouyi) is in fact compressed and complexed buildings spread like involute corridors with small sized rooms. This is a vast town for communicational reasons between neighborhoods and preserving peoples’ property and lives in times of danger, and it has expanded both horizontally and vertically. The underground town of Noush Abad is a unique relic that is located in the 14 meter depth under the ground and it goes to even 18 meters deep.
This valuable complex is registered in the list of valuable national relics in 2006 with the registration number of 15816. 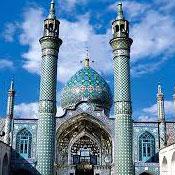