Gilan Rural Heritage Museum is a museum in Saravan forest park in Rasht in Gilan Province. The museum is on a land with an area of about 260 hectare in Saravan forest park located 18 kilometers from Persian Gulf Highway (Rasht-Tehran Road).
Preliminary studies phase of this museum began from early 1381 solar Hijri year. The first workshop of this plan (the cultural and architectural field of east plain of Sepidroud) was launched in Ordibehesht 1384 and its executor was Dr. Taleghani and the first workshop supervisor and former of the first buildings and museum area was engineer Pouya Mir Yousefi. The idea of establishing this museum was formed after the earthquake in Khordad 1369 in Gilan that exacerbated the process of destruction in traditional monuments. However, its preliminary studies phase began from early days of 1381.
Buildings of 9 original villages of Gilan Province which are symbols of original architecture in Gilan are placed in this museum and they were replaced in the museum site. Out of these villages, one village is in the eastern plain of Gilan, that is, Lahijan and Rudboneh and the second village is for the central plain of Rasht. The third village is related to Fooman. The available buildings in the site of the museum date back to 65 to 180 years ago. The life style, jobs, houses and native handicrafts of people in Gilan are represented in this museum. 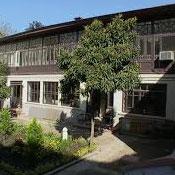