The Pasargadae World Heritage Site is one of the ancient remains of the Achaemenid era, located in Pasargad, Fars province.
The Great Cyrus established the Iranian government, Achaemenid, in 550 BC, and chose Pasargadae as its first capital, a large plain that was irrigated by the Polvar River.

Pasargadae was the capital of the first great multicultural empire in Western Asia. Spanning the Eastern Mediterranean and Egypt to the Hindus River, it is considered to be the first empire that respected the cultural diversity of its different peoples. This was reflected in Achaemenid architecture, a synthetic representation of different cultures.

Pasargadae is a certificate of Achaemenid architecture and mixing of different cultures. Its palaces, gardens and the mausoleum of Cyrus are outstanding examples of this area.
Its Royal Garden, "Four Gardens", became a model for architecture and design in Western Asia.

Tall-e Takht, a fortified terrace; and a royal ensemble of gatehouse, audience hall, residential palace and gardens are the other parts in this area.

This valuable collection was recorded in UNESCO World Heritage on July 16, 2004. 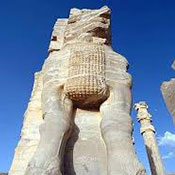 Tomb of Cyrus the Great Pasargad