Sang Shekanan Cave in Jahrom which is known among the locals as “Sang Eshkan” is the greatest handmade cave in the Middle East and one of the greatest and most beautiful artificial caves in the world. Sang Eshkan Cave consists of different openings and columns that can be seen in the form of cross-porches. The porces are made as a result of removals and extractions of limestones and dolomitic stones and the cave is considered the greatest artificial cave in the world. Of course, there are even greater caves in the world but most of them are in the form of a tunnel or a whole porch that are formed as a result of extracting minerals by different mechanical mechinaries. Therefore, it can be said that there is not a cave greater than this cave with th features of being handmade and with various porches, columns and openings.
These stones were used for decorative works of building façades and portals, latticed windows, covering yards and platforms, tombstones, stone inscriptions, stone lions, wash, downpipes, stone bound ponds and pools, stairs, facades, stone mortars, stone pots, stone taps, stone crocks, plinths, etc. for their ductility. The portal of Shah Cheragh Shrine, Atigh Jameh Mosque in Shiraz, Eram Garden and New Mosque are some of the most important places where these stones have been used in. 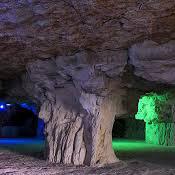