Yadgar Shah Mosque
Yadgar Shah Mosque is amongst the most elegant ancient opuses.
This mosque is known as Safavid mosque and people believe that one of the Safavid kings has built the mosque due to his oblation, and even this matter has been installed on the inscription of rebuilt transom, but evidences and studies show that this mosque has been constructed by Yadgar Shah who had been one of the warlords of Turkoman Ghara-yousef.
This opus has been recorded as one of the national works of Irna with register number 23043 in 2nd of Mordad, 1387 (2008).
Yadgar Shah Mosque is also called Sayyid-al-Shuhada Mosque. 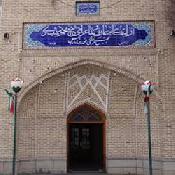